I signed up for the 50K and Jess signed up for the 10K.  Fort Ord is South of the Bay area down between Salinas and Monterey, Calfornia.  It's an old military property where they conducted a lot of army training back in the day.  There is currently a race track there which is where the start / finish line is for the race.  It's a really neat area with plenty of single track trails, some wide trails, rolling hills, and great views of the entire area.  The race is put on by Inside Trails which is, in my opinion, one of the best trail race companies in the Bay area.  This was a great race for multiple reasons which I will explain in more detail but I felt really great and ended up with my second best 50K time along with meeting a new friend Shaun.

Jess and I drove to Monterey for dinner and then went to our hotel for the night.  It rained pretty hard as we were chilling in the hotel and I was wondering if it would continue through the next day.  Forecast was calling for spotty showers throughout the day.  We got to the start line in the morning and it seemed like the rain was going to let loose.  We started the race and the first few miles were on a dirt road which was pretty muddy in areas.  Then the rain let loose and we got a good soaking.  We were then on some winding rolling single track trails for awhile.  Most of the race alternated between these two types of trails and there was only one small section that had to be repeated.  The rain continued on and off for the first half of the race.  I met one kid that was doing his first 50K and met a few other people along the way.  I ran a few miles with a guy named Greg who is from Paradise, California where a deadly wildfire in 2018 had wiped out most of his city.  I saved the day for a random runner who went right by a course marker at a turn, I saw him at the top of a hill going in the wrong direction and yelled out to him.  He was thankful for the shout.

For my own standards I had a pretty good overall pace coming into the mile 25 aid station.  I thought maybe there was a possibility I could break the six hour mark.  This is before I found out the biggest climbing section of the whole race was in the last six miles.  At this aid station I was filling up my water bottles and making sure I had enough fuel to make it through to the end.  A guy named Shaun came into the aid station and had a very bloody knee from an earlier fall.  He and I left the aid station at the same time and since we had a huge climb at this juncture it gave us some time to talk about running and races etc...Turns out he lives in the Oakland Hills and he has done some really extreme ultra races such as The Bear, Fat Dog 120, UTMB, Western States, and Hardrock!  Holy crap, those are major freaking accomplishments.  On the way up this big climb it started raining again and this is a very exposed area with no trees at all.  The winds picked up and rain started coming down really hard and I picked up the pace as I just wanted to be done.  Shaun had fallen behind on his nutrition and he temporarily slowed it up.  I pushed on through the last few miles and the rain stopped with about a mile to go and the sun even made a brief appearance.  I was glad to see Jess at the finish line and she was cheering me on.  I ended up with a great finish time for myself and was proud of my accomplishment.  I think my new training grounds in the Bay Area have proven to be quite helpful to my running in general.

Jess had a really great run in her 10K and got to go back to the hotel and relax while I was out on the course.  Jess and I met a couple from Ohio at the finish line.  They recognized my Forget the PR 50K T-Shirt I was wearing.  They had moved out to California and live in Monterey.  It's always cool to run into Midwest transplants out here.  Then a few minutes later Shaun came across the finish line with his bloody knee.  The medic dumped a bunch of hydrogen peroxide on it and bandaged it up for him.  We chatted a bit as we ate some food and got ready for the long drive home.  Overall, this was a fun race and I enjoyed the whole experience.  It was cool to meet Shaun as well, always nice to get a new running friend and have someone to log some training miles with. 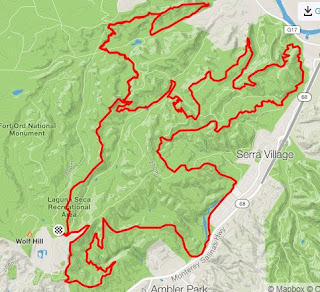