This race takes us to buckeye country or better known as Columbus Ohio for the Capital City Half Marathon.  I had just completed my first ultra three weeks prior so I did not have any time goals in mind.  Just wanted to go out there and have fun.  I also wanted to really embrace the one thing that has allowed me to get back into running and that is minimal footwear.  I decided to run this race in my Luna sandals.  This is the company started by Barefoot Ted and if you have read Born To Run then you are very familiar with who he is.  As the race date approached we noticed the weather was going to be in the 80s which is pretty hot for a road race, especially since it was in early May.  We stayed at our friends Seth and Tania's house the night before and we got up early on race day and they drove us right to the start line which was awesome.  Usually for big road races we are walking a couple miles from where we parked to get to the race start.  Here is a pic of me in my Luna Sandals right next to a barefoot runner that was starting near us: 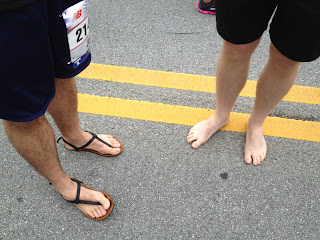 Jess and I had plenty of time until the race started so we kind of just hung out in our starting area.  I was already getting some weird looks as I was standing there is my sandals.  I didn't really know what to expect from peoples reactions.  I figured with the whole Vibram Five Finger movement that people were pretty use to the minimalist footwear scene.  However, I think there was a big shock value to many seeing someone toe the starting line in barefoot style sandals.  One guy I met named John asked me when I was going to change into my running shoes and seemed concerned when I told him that what I had on are my running shoes.  I told him I have been running in minimalist footwear for two and a half years and the reason I first started doing it was that I had bad shin splints which disappeared with barefoot style running.  We talked for awhile and he turned out to be a really nice guy.  Then the barefoot guy from the pic above struck up some conversation.  I think he was even getting more weird looks then me.  So after some final instructions and the national anthem the race was underway!  Here is a pic of me waiting to start my minimalist fun run: 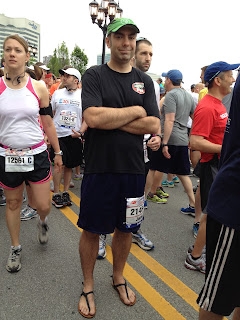 When we started I settled into a nice pace with Jess as we ran together for the first 5 miles or so.  There was bands playing along the course which was a nice touch.  I got a few more comments and a lot more stares when we were running.  Someone even made a statement that they did not want to lose to a guy in flip flops.  After awhile we caught up with my new friend John that I met at the starting line.  We were talking for awhile and he was telling me about these Buddist Monks that run for hundreds of miles.  I think I heard about them before but did not know details.  Jess was overheating and dumping water on her head at every aid station.  One time she thought her gatoraid was water and dumped that on her head....oops!  So about mile 6 we approached the famous horseshoe where the buckeyes go to battle every fall.  It really got me pumped up to see the stadium.  Jess was going to slow her pace down due to the heat and requested that I go on without her.  I took off at a fast pace as I was feeling awesome.  Here is a pic of me running in my Luna Sandals.  I would like to purchase this digital image but they want $30 for it...jeesh! 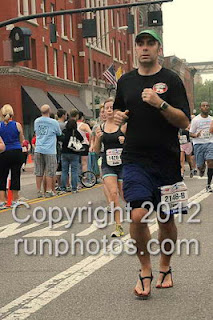 I kept going at a good pace and passed a bunch of people.  Apparently there was a lot of other runners who were being affected by the heat because there was people at every medical stop that were in bad shape.  Some were even getting ambulance rides!  About mile 10 I ran into the barefoot runner that I was talking to at the start line.  His feet were hurting as he told me he wished he had my sandals on.  I stayed with him for a mile or so and he said he had to walk so I went on without him.  About mile 11.5 I seen Seth and Tania cheering me on.  I didn't have my phone with me so I told them I would walk back to where they were when I was done with the race.  I was unsure of Jess's status so I thought it would be best just to meet everyone back where Seth and Tania were.  I finished strong with a time of two hours and eight minutes.  I was pretty surprised that I was only five minutes off my PR.  Started thinking that if I ran this race at full potential I probably could of broke two hours in my Luna Sandals!

Actually, my feet felt better after this race then any previous race I have been in!  I was also worried that the knots under my sandals were going to break and I had put duct tape on them earlier in the week which helped keep them in tact.  So after I finished I started walking back along the course to go to where Seth and Tania were when all of a sudden I see Jess!  She was running strong with a half mile to go.  I sprinted back to the finish line so we didn't lose each other but I could not see her amongst the sea of runners finishing.  It took us awhile to find each other but we finally did.  Phew!!  I was really happy that I decided to run in the Luna Sandals.  They made me appreciate everything that I have accomplished in the last two and a half years.  I am going to Colorado in Sept. for my next big run which is going to be a bear or maybe I should say a rabbit.  Really looking forward to running 50 miles in the mountains with Lucas Hardbarger and Joe Gatton.  I leave you with a pic of me and Jess after finishing the half marathon: 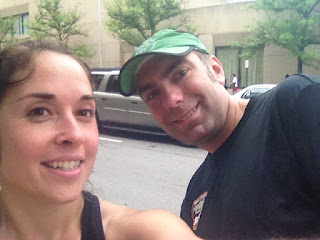 Posted by Jamie Farley at 2:59 PM No comments: