This was my first race since moving to San Francisco.  I have had a few injury set backs since picking up mileage over the fall and winter.  I was not use to running hills all the time and severely strained my calves on a high mileage week.  We were signed up for a race in November that got cancelled due to wildfire smoke but it was probably a good thing because my left calf was destroyed. I also had some quad issues after my calves started to come around.  I have been itching to do a race since we moved here because there are so many cool trails around and there are races about every weekend.  I knew I needed to get use to running hills before getting into any of the ultra distance races.  I slowly have been building mileage and careful not to overdo it on any given week. This race was brought to my attention by my friend Chris.

I met Chris at Mountain Lakes 100 in 2017, he lives in the Bay area and comes from a marathon background and he is fast.  I mean really fast, for example, he recently ran a half marathon in 1:10.  He started getting into ultra running and wants to compete for podium finishes.  About a week before this race he shot me a message saying he just signed up for the Crystal Springs 50K.  I took a look and they offered different distances including a 35K (22 miles) which would be the perfect training run for Fort Ord 50K that I am running in two weeks.  I signed up for that and they also offered a half marathon which Jess signed up for.  This race takes place in Woodside California which is about 45 minutes away from our place in San Francisco.  Woodside is home to multiple parks and redwood preserves.  The trails are some of the most beautiful in the bay area and almost completely in the forest.  The first 6 miles of the 35K was a steady climb, then 4 miles of rolling trails, and then turn around and go back.  Having a downhill for the last 6 miles was a welcome thing.

Winter in the Bay area is the rainy season.  The whole week leading up to the race it was sunny and beautiful out.  The night before brought major storms etc..  It was raining pretty hard on our way to the race.  The radar showed it was going to clear up for a little while during the race start and probably hold off for 4 or 5 hours until more rain came.  It started to sprinkle during the send off speech and within minutes after the race started it began to pour.  There were a few breaks in the rain throughout the race but it pretty much rained the whole time.  At the start I saw Chris take off like a bat out of hell, he hit those trails in the lead and quickly disappeared.  I felt pretty good on the 5.5 mile climb to the first aid station.  I was also trucking along pretty well on the next rolling sections of trail.  When I got to the halfway point turnaround I was starting to feel a little fatigued.  I was wondering how Jess was doing in the rain and also wondering if Chris was still in first place.  The rain had turned the trails into a muddy mess.  I was reduced to walking up all the hills even the small ones.  A guy that was still on his way out to the turnaround seen my playing possum shirt and told me that I was pretty fast for a possum...I told him that was simply not true but thanks for saying that!

On the way back I had about 7 miles left to go when I heard my name yelled out on the trail behind me.  I turned around to see Chris still in first place for the 50K and he was hauling ass while cruising by me!  This actually put some wind back in my sails and I picked up the pace for the last segment of the race.  The fact that it was all downhill really helped out my pace as well.  I was really looking forward to finishing this thing up so I could get a warm cup of coffee.  I ended up finishing in 4 hours and 20 minutes (4:20..hehe) which I am very pleased with.  After crossing the finish line I congratulated Chris on his 50K victory and got the low down on Jess and her half marathon.  Turns out she had a really great race.  She did good on the climb up to the turn around point and then flew down hill like a bat out of hell.  Instead of changing clothes I opted to get some hot soup and skip the coffee for a tall can of pilsner.  Everyone we met after the race was really cool.  It had a nice family atmosphere feel to it which is what I like.  It reminded me of most races back home that I volunteer at or run every year.  I am excited to see what Chris will do as he enters some big name races this year.  I think he has the speed and determination to compete with the best.  All in all it was a really fun time at this race, the rain and mud made it a true California winter trail race.  I was please with my finish time and I am ready for the Fort Ord 50K which is in two weeks! 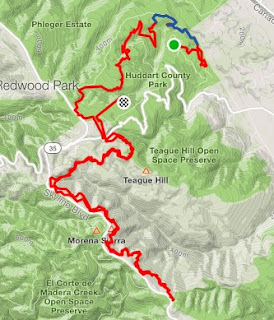 Posted by Jamie Farley at 9:31 PM No comments: