It took me forever to write this blog. Here it is January and I was contemplating if I should write it or not. I owe it to the great sport of trail running and the great people who joined me on this day to man up and write!! This was my second year doing the Woodstock Hippie Half and the first race since my marathon in late July and I was looking forward to it for a few reasons. The biggest reason is that I was going to meet people that I correspond with online all the time but have never met in person. Dos was coming from Iowa with his son and Chill was coming from Minnesota. We all post our miles in a running forum online and through correspondence and sharing of our training ups and downs we have become pretty good friends. We are also very similar in experience level for distance running. I was pumped when they said they were making the long haul to Woodstock and I was excited to do some trail running with them as Woodstock is a shining example of a pure trail running fiesta! Since this was my wind down run only a little over a month after the marathon I decided to just do the half marathon, wear my VFF Trek Sports, and just take it easy and enjoy the great bridle trails of the Pinckney State Rec Area. Dos was going to do his first marathon ever and Chill was going to run the half with me.

So Friday evening I roll into the Hell Creek Ranch after work and find out that Dos and Chill scored us an awesome camping spot right by the bathrooms. I think it was designated for the 100 mile runner's and their crew, but no one really seemed to mind that we were there. We decided to do the Friday night 5K, afterall this was a whole weekend devoted to trail running so we were going to take advantage. Dos decided to jog thru this but Chill and I just took it easy and hiked. We seen some of the Hallucination 100 mile runners coming down the trail starting their second 16.6 mile lap. It had also started raining while we were on the hike which was going to make things interesting for Saturday morning. It had rained for about 2 days straight earlier in the week which kind of souped up the trail. We ran into this guy toward the end of the 5K who had gotten lost during the 5K and ending up running about 10 miles. He didn't seem to happy as he looked spent and was doing the marathon the next day..LOL. So it became dark by the time we finished our hike..funny how the Woodstock 5K is actually 3.75 miles but it is all in good fun. The rain was pretty steady for awhile that evening and then died out for an hour or so. We hung out by the fire and shared some stories. I got a surprise when I was walking up to go to the bathroom and glanced over at the pool..there was a bunch of naked people in there..a true Woodstock weekend..LOL.

Jess came to camp with me Friday night and while I was doing the 5K she had gotten the tent all ready with the air mattress and blankets etc. and it was nice to just jump in and lay down in the cool September evening. As soon as we were about to doze off the thunder and lighting came rolling in. The rain was heavy and did not stop until about 6:00 AM. The large amounts of rainfall had turned the trails in a muddy mess. I was kind of excited about this because I knew how much fun it would be sloshing thru the woods sliding in the mud etc. The gun went off and Chill and I ran the loop through the campground together. We had lost Dos at the start and I figured he was way ahead of us as he was training so hard for this marathon and had a goal of finishing in under 4 hours. After the loop through the campground we reached the single track trail that went into the woods. It was a major mudfest! Ankle deep in some areas. People were losing shoes in the mud and slipping / sliding all over the place. It was awesome!! The first 2 miles or so were spent getting acclimated with running in the thick mud and then we hit the Lakeland trail where we would do a big out and back before heading back into the woods. The Lakeland trail part of this course is a flat mini gravel type wide track trail which is nice and relaxing for a few miles. The whole time on the Lakeland trail I was looking for Dos to come whizzing by on his way back from the out and back section. I never did see him and figured either I missed him somewhere or he was going so fast that he did the out and back section and got back into the woods before I would even have a chance to see him. If this is true then that meant that he was probably in first place and really kicking some ass! Here is a pic of the start of the trail: 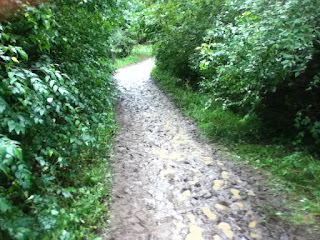 After I reached the furthest out point and turned around I did see Chill who was not far behind me. We gave each other a respective high five and I asked him if he had seen Dos and he had not. So I got back to the point where we entered the woods again and back to the single track fun in the mud. A weird thing was happening as we got back into the single track trails. There were runners coming at us. These trails were a one way only part of the course and I could not figure it out. Were they doing one of the longer distaces and the course required them to come this way? Afterall Woodstock does have a 100 mile, a 100K, a 50 mile, and a 50K on top of the other marathon distances so it could be possible that this was part of one of the courses. We started seeing more and more runners passing us going the other way. I started to wonder if there was a huge mud pit or impromptu mud river that people could not get thru and they were going back to quit? Finally we started asking people where they were going. Apparently during the start and the loop thru the campground we ran by the section of trail where all the races end and some people thought it was part of the course at the beginning. So a few people jumped into the trail there and a bunch more followed. So there was a good number of people running the course IN REVERSE!! Another nice pic of Mudstock: 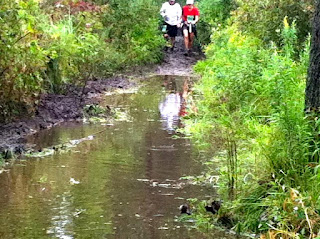 I started to think that was what happened to Dos since I did not see him on the out and back setion of the Lakeland trail. The rest of the race was just as I had envisioned it, very slow and fun. Going through all the mud like we were kids. Sliding down hills and struggling to make it up other hills because the mud was so thick. I entered my favorite section of the course back in the pine forrest and was just happy to be having such a great day. Also, hoping that Dos and Chill were having as much fun as me. Heck, they drove a great distance to do this thing and it would be a bummer if they were not having fun. I got out of the woods and ran through the finish line and straight to the food line. I had not eaten anything nor did I take any GU chomps with me out on the course. I could of grabbed a gel at an aid station but I am not a huge fan of them so I passed. The bananas and cookies at the finish line were phenominal! I stood there chowing down for a few minutes. Then I decided to hobble over to where the trail dumps out into the campground so I could root Chill to the finish and also try to figure out what happened to Dos. I seen Dos Jr. over by that point with a few other spectaters and he had not seen his dad either.

Then out of nowhere Dos emerged from the trail and seemed kind of irritated. Turns out he was part of that group at the beginning that ran into the trails going the wrong way. He had came back out to the campground and was led the wrong way again. Then someone finally showed him the correct way to get into the start of the trails. He had run about 5 miles out of his way before actually starting on the correct course! I applaud his determination though, as he just finished his first 13.1 mile loop with 5 extra miles added on and he decided to go for his second loop! His goal of a 4 hour finish was kind of a wash but I think he was having such a good time that it did not matter. He ended up doing his second loop and ran about 50K. Not only did he do his first marathon he did his first ultra as well!! His son had bought him a 26.2 sticker and also an ultra sticker which he placed on the car before Dos got finished. Here is Dos after his Marathon / 50K: 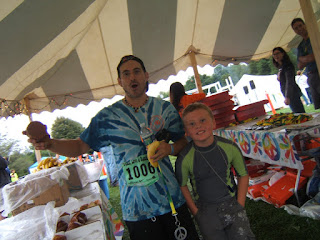 Chill was right there with Dos when Dos came off his first lap and after Dos started his second lap I met up with Chill and we discussed the course and the weather conditons and about how much fun we both had. I was glad to hear he enjoyed running the trails especially in the extreme conditions. We both had a beer to celebrate our finish. I waited quite awhile before I hit the showers as they were pretty jammed. This gave me time to rinse out my VFFs and get some more food down. The shower house had about an inch of mud everywhere but it felt great to get all the mud rinsed off. Dos finished up his marathon and was feeling the burn of that awesome distance. We hung out and talked all afternoon. Dos and Dos Jr. left to start their long drive home. Chill and I stayed and camped out Saturday night. We both met some interesting characters and also went into downtown Hell, MI for some pizza which really hit the spot. Here is a pic with Dos, Chill, and myself: 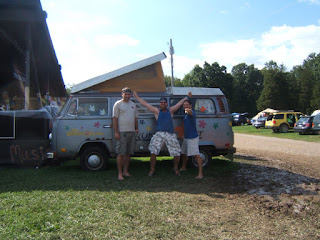 I would give this weekend an A+ as it was so much fun meeting these guys and running in the mud. Dos and Chill had so much fun they vowed to return in 2012 to Run Woodstock again! Chill is gonna run his first 50K! I think I am just going to do a slow half since I have an ultra planned in Colorado the weekend after.
Posted by Jamie Farley at 2:54 PM No comments: