This race took me to Farmington Hills, MI which was nice because it is about 15 minutes from our house. It was a nice 4 mile run which started in a park, then went through some residential neighborhoods, and the last part of the run went through the downtown area finishing up back at the park. Phew! It was great to have a 4 mile loop instead of having to backtrack through the course. Jessica did not feel well when we woke up on the morning of the race so she decided to sit this one out. I was disappointed when I found out that the race did not start until 9:00 AM especially because it was already hot as hell outside at 7:30 AM. I later found out why they started the race late, which I will explain later in this blog. I thought I should get there early because I knew they were closing off streets in Farmington Hills due to their town festival and I thought parking may be limited. So I threw on my trusty Vibram's Five Fingers KSO's and away I went. Here is a pic of the race course: 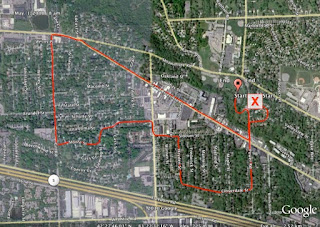 I got there about 8:00 AM and it was perfect timing because I was able to park right where the race started. I quickly got my race packet and was all set. The park got packed with about 300 runners all trying to check in right after I checked in. I had a lot of time to kill so I just did some stretching and walking around for awhile. They decided that the race should start across the street from the park in the residential neighborhood so runners did not have to cross the road that was not closed off. Everyone wandered over to the suburb across the street as some residents were happy to see us but others were a bit weary of all these people standing in their yards. I was trying to see if anyone else was wearing Vibram Five Fingers but once again, I did not see any. Then I noticed one guy was barefoot! I was glad to see that and I eventually caught up to him later in the race and had a brief exchange of how great it was to run without any cushion or padded shoes.

So there was no warning that the race was going to start and all of a sudden the gun went off and we were under way! Before the race my goal was to finish in under 33 minutes since I finished in under 35 minutes during the Fremont 4 miler. As we got started I quickly realized that I was not going to accomplish my goal. This was due to the intense heat and a nagging pain that I have where the heel meets the arch. I think I overdid it in one of my training runs earlier in the week. Went about 5 and half miles and the pain was intense the day after that. Anyway, I thought I would just take it easy and enjoy the atmosphere. About a half mile into the race I caught up with this middle aged woman wearing a wonder woman costume and she had started walking. She sounded like she was hacking up a lung. She may have smoked too many cigarettes the night before. About a mile and half into the race was the one and only water stop. Usually I just pass them up but it was so hot out that I needed some water. Only problem was that they were short staffed on volunteers and only had two girls filling up glasses with water. They were far behind and I had to wait about 10 or 15 second before I got a glass, but it was worth it!

So we were in residential neighborhoods for the first 2.75 miles and then we came up to Grand River, which is the main road going through the town. That is when I discovered that we were running 1.25 miles right down Grand River through the parade route. That is why the race started late because they wanted a bunch of people to be lined in the streets for the parade and to cheer on the runners. There was quite a few people out there watching us run and they were probably glad to be on the sidelines since it was so hot out! We ran by the Budweiser horses and a karate troop who was doing jump kicks in the street. The nice thing about this stretch of road we were on is that it was a slight downhill run the whole way through town. This was a nice treat considering my foot pain and also the inferno like weather. I also realized that my time was going to be better then I thought. So I finished strong and ended up under 35 minutes (34:20) which is not bad for me.

The race finished up back at the park and they immediately posted the results. I got 151st out of about 300 runners and 8th in my age group. I grabbed a bagel and an ice cold water which was very refreshing. Then for the drive home I threw on my new comfy 4mm Vibram sole huarache sandals that I just made. Here are pics of my huaraches and me driving home after the race: 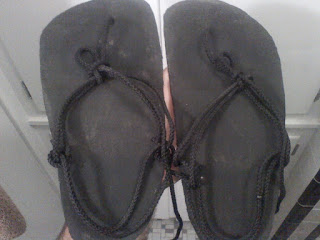 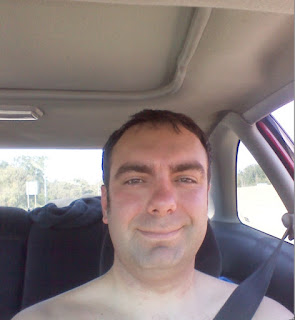 Our next race is in two weeks. It is the second annual Kentucky Hill Run (5K) at my friend Jauf's cottage on Williamstown Lake. There is some really challenging hills in this run...can't wait! Although I am not sure what to wear for the run...huarache sandals or my Vibrams Five Fingers?...ahh, the dilemmas of a minimalist runner.
Posted by Jamie Farley at 6:18 PM 3 comments: