This race takes us to the city of Kokomo, IN for the 16th annual Kokomo Symphony Composer Classic 5K. We were in Noblesville, IN for a graduation party and decided to run this race since it was not to far away from where we were staying. We got in town late Friday night and did not get much sleep since we had to get up early and drive to Kokomo, but we both felt awake and fresh on the way there. We got there with plenty of time to spare and it was nice to have some extra time to get ready for the race. There was a 5K speed walking competition which had 29 participants and the 5k run which had 123 participants. This is by far the smallest crowd of the three races we have done this year. It was kind of nice to not have to battle a huge crowd for a change. Also, I was surprised and excited to see someone there, besides myself, wearing Vibrams Five Fingers. The weather conditions were hot and humid and we were sweating before the race even started. Here is a pic of us before the race: 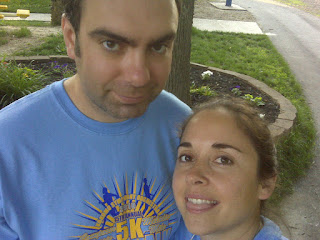 So we lined up at the starting line and the race was off. The course was 1.5 miles long so we had to repeat it. Normally I don't like covering ground that I have already covered, but it was kind of cool to see the leaders as we passed by them on the second loop. I also got to see Jess as I passed her and gave her the thumbs up. The race was on a road that ran through the park. There was geese everywhere and we had to dodge them and all their shit that was on the road. I felt great during the first mile and thought I really had a chance to finish in under 26 minutes which would have been a great time for myself. About 1.5 miles in I started getting some calf pain. I might of pushed it too hard during the first mile. The pain was not bad until about 2.25 miles in and then it really slowed me down. At that time a little kid passed me up and all I could do was laugh. I could not finish strong and got passed up by 4 people on the home stretch, that was kind of disappointing. Here is a pic of the race course: 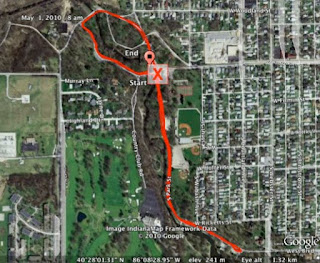 When I finally got into the finish shoot I realized that my time was actually pretty good. I finished at 26:15 which is a personal best for me since I started minimalist running. I walked back through the course to give Jess a little motivation for finishing the race. She actually did very well too finishing with a time of 31:16. After the race we stuck around for the awards ceremony. To my surprise I finished second in my age group, I was shocked when they called my name to come up and get a ribbon. I really hope there was more then 2 guys in my age group...LOL. Most of the people there knew each other and clapped for the winners. When my name was called a silence filled the crowd. Jess was the only one cheering for me, but we both had a good laugh about that. Here is a pic of us after the race: 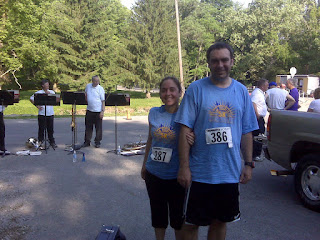 There was a few members of the Kokomo Symphony Orchestra there. They played music before, during, and after the race. Not the usual type of music you hear at a race, but "when in Rome." All in all it was a good run. Different then the other two we have done since there was not many people there and it was in a park. It was a nice change and we both set our best times of the year. We also had a great time seeing a lot of Jess's extended family over the weekend. We do not get to see them to often but we always have a great time when we do. Our next race might be the Camelback 4 mile run in Fremont, OH on June 20th. One funny thing that I forgot to mention about the race we did in Chicago, right before the run some guy was weaving through the crowd of runners with a cigarette in his mouth asking if anyone has a light. The irony makes it worth mentioning even though it might be one of those 'you had to be there' moments. I will leave you with a pic of me after getting my second place ribbon: 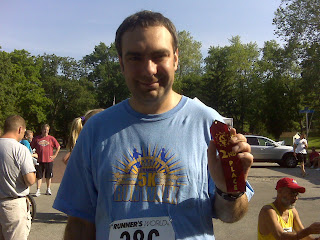 This race takes us to the great city of Columbus, OH (Buckeye country!) for the Commit to be fit 5K. The main event at this race was a half marathon, but they also had a 5K and we decided to do that since we are far from prepared for a half marathon. The night before the race we stayed with our friends Seth and Tania who also were running in the 5K with us. We got to bed early and got a good night sleep, which is a good thing since we were getting up at 6:30 AM.

We got up and left for the race with plenty of time before the start, so we thought :) When we got to the area where the race started there was a ton of people everywhere and we were trying to fight our way to the parking garage. Stuck in all the madness we parked about 10 minutes before race start time. We quickly scurried to the start area where we heard the announcement of "2 minutes until race start"...made it, phew! There were no porta potties in sight and of course a few of us had to go, but we held it throughout the race. Here is a picture of jess and myself before the race: 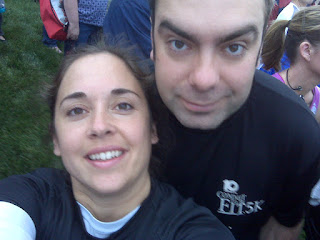 It was really overcast at the start and appeared like it was going to downpour, but the rain held off right until the end of the 5K. Before I describe the race I need to provide a little more information. Our friend Seth has two pair of Vibrams Five Fingers and wears them often. Before the race he had only walked in them and never ran in them. He decided to run the 5K in his Vibram Five Finger KSOs since he did not have any running shoes. I explained to him that running in this barefoot style can cause major calf pain the first time out. So the race started and I immediately lost the other three as there was a ton of people running this event. Then out of nowhere about a quarter mile into the race I see Seth fly by me. Oh boy..I thought, I remembered the first time I ran in Vibrams and went a mile and a half and the calf pain the next week was severe.

For some reason I just was not feeling great during the start of the race. I pretty much just maintained a steady hard pace the whole time. At Chicago last weekend I was speeding up and slowing down a lot. We got about a mile and a half into the race and the half marathon runners split off and headed in another direction. It almost made me feel like I was doing the jog of shame in that split off, but like I said before, I am definitely not prepared for a half marathon yet. To make things worse right after the split off I got passed by the Nestle Quick mascot! Oh well, i just kept pushing on. I caught up to Seth at mile two along a river path and he ran with me for a little ways then I picked up my pace a little so I could finish strong. Here is a satellite view of the course: 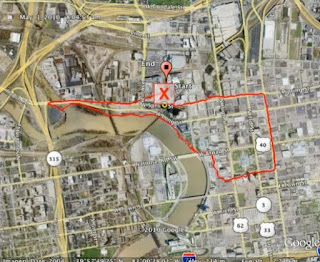 As I got on the last straight away of the race I looked at my Garmin 305 and realized there was a good chance i was going to beat my time from last weekend, which surprised me since I thought I was doing bad at the beginning. My watch said I was at 3.05 miles and it seemed that there was still a good distance to go. When I realized the course was not correct (longer) I stopped my watch. Another runner with a Garmin said the course was 3.25 and not the real 5K distance of 3.1 miles. I also realized I stopped my watch before the actual 5K distance and I still had .05 miles to run to get my true time. I crossed the finish line and then went off to the side and ran the last .05 miles setting my time under 27 minutes! I came in at 26:46. The official time according to the results page online is 27:52, but like I said the course was long. I came in 210th place out of 1869 runners overall. Jessica came in at 604th place out of the 1869 runners at a time of 33:01. So we both did pretty good for our second 5K. On the results page our names are switched because we were wearing the wrong tags...even though Jess begs to differ...LOL. Seth came in after me and then Jess came in and then Tania who is pregnant and did a great job finishing the race. All in all it was a good race and a great time! Seth was having a little trouble walking from the calf pain but after a day or so he has recovered quite well. Here is the photo of all of us after the race: 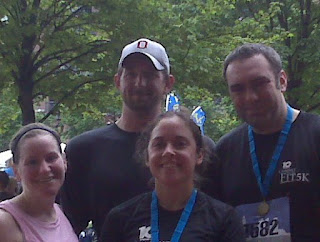 It turned out to be a great weekend. We got to see our friends Luc and Jen that we had not seen in a long time. Also we went to a Kentucky Derby party at our friend Caseys house. Finally we ended up hanging out after hours at our good friends Shawn and Jackie's place with some more of our friends. I would declare our second 5K on our running tour of the mid-west a success. Next stop is the 16th Annual Composer Classic 5K in Kokomo, IN on May 29th. We are going to be in Noblesville, IN that weekend for a graduation party and decided to hit up the 5K.