These races take place at Pinckney Rec Area near Ann Arbor.  I spend a lot of time training out there and I have never ran at this trail event.  The no wimps challenge consists of running the 1/2 marathon on Saturday and the 50K on Sunday.  I was going to do these distances for my training runs that weekend so I thought it would be a great way to train with some aid stations.  Jessica signed up for the marathon and I was super excited for her as it would be her first.  My friend Tyler signed up for the 1/2 marathon which would be his first.  Tyler recently started doing cross fit and lost a bunch of weight and decided to try out a trail race.  Lucas was coming on Sunday because he signed up for the 50K and the stage was set for the weekend.

Tyler and his friend Greg came up to our house on Friday night.  We got to bed pretty early and made it out to Pinckney for the 1/2 marathon.  It was pretty cold out in the morning with temps in the low 30s.  We stood around in our long sleeve T-shirts and shorts shivering until the gun went off.  Tyler, Greg, and myself settled into a nice pace.  I wanted to make sure Tyler didn't go out to fast with all of his adrenaline going.  We cruised through the first two aid stations and then we got separated from Greg.  Tyler was looking very strong and we passed a lady who Tyler thought was falling and he reached out to save her and ended up punching her in the gut!  He was very sorry and she said she was ok but it was one of those crazy things that happen in a trail race.  We got a pretty good laugh after all of that.  About mile 11 Tyler started to feel the burn of going further then he ever has.  He kept a strong run walk run walk pace.  We were at mile 13 in no time.  Then when Tyler seen the finish line he took off sprinting faster then anyone I have ever seen run to the finish line!  Greg finished not long after us.  Tyler has a lot to be proud of.  Finishing this race is just a stepping stone in his overall transformation.


Saturday night Jess came home from being out of town.  We got to bed at a decent time again because I had the 50K and Jess had the marathon to run.  We were up early on Sunday and drove back out to Pinckney for our races.  Lucas met us out there as he had to drive in from out of town late the night before.  The weather was to be perfect.  It was mid to high 30s to start and would climb to the mid 50s during the day and the trails were mostly dry.  It does not get much better then that for a trail race.  The gun went off and we settled into a slow but steady pace.  The first 13.1 mile loop went by pretty quickly and all three of us were feeling good.  We set out on the second loop and settled back into our pace.  I had been training pretty hard for my July 100 mile race in the months leading up to this race so I was itching to take off and finish the 50K strong.  I knew it was too early to push myself hard.  Jess was also feeling really good and she was doing awesome.  Lucas's knee was really hurting him and we hung back with him for awhile.  About mile 20 I was fearing the cutoffs and not completing the no wimps challenge.

I made sure Lucas was cool with me taking off.  I also made sure Jess was cool with me leaving her side during her first marathon ever.  I was disappointed that I would not see her finish but she was looking really strong and I had no doubt she was going to complete her marathon.  So with her confirmation I took off and passed a bunch of people.  There were definitely some confused runners as I bombed by people like the race had just started.  I came through the start finish area and had one more 5 mile loop to go.  I started feeling pretty burned out and tired for this last leg of the race.  This 5 mile loop had a lot of hills to climb and I just wanted to be done.  As the finish line came into sight I seen Jess with her finisher medal around her neck and I got a burst of excitement.  I finished up the no wimps challenge and proceeded to give Jess major props for dominating her very first marathon!  She kicked some major ass on the trails.  The last two miles were tough for her because she had a bad IT band flare up and could not run on it.  I have gone through that issue multiple times and I know how much it sucks.  Lucas had a really bad problem with his knee and ended up stopping at the 26.2 mark.  He got a finisher medal for the marathon.  It was really nice that he made the drive out to run this race.  He did his first marathon ever on this course so it was cool for him to come back years later and run the race again.

This was definitely a weekend of firsts.  Morale was at an all time high.  This race gave me some good confidence and momentum for my Burning River training.  Next stop will be the Trail Factor 50K in Portland where I will be running with my good friend T-P!

Posted by Jamie Farley at 5:46 PM No comments:

This is one of my favorite weekends because I get to see a few hundred trail runners enjoy the Forget The PR 50K and 25K.  It is nice to give back once in awhile and that is why I make it a point to volunteer at this race every year.  The fact is that I have just as much fun volunteering as I do running the races.  I also like to get a few runs in since I am in Mohican for the weekend!  Last year I did a run at 4:30 am on the race day and was done before the 50K started.  Lucas was camping and volunteering with me and when I suggested doing an early morning run before our volunteering duties this year he was completely on board.  Both of us also signed up for the half marathon which was on Sunday morning.

I got to Mohican Adventures in the late afternoon on Friday and was able to assist with loading the boxes of aid station supplies into the trailer.  My friend Steve Pierce was also there and we put out the parking sign and did some other odds and ends.  We both went down to Trails End Pizza for some dinner after helping out.  I went back to the camp site and set up my tent along with getting ready for our early run the next day.  Lucas showed up around 10:30 and we got his tent set up and talked until around 11:30.  It was a cold night and I did not get much sleep but when 4:30 rolled around I was ready to go!  Lucas and I set out into the dark trails and completed 10 miles in the cool morning.  The showers where we were camping had no hot water and taking a cold shower when the air temp is 40 degrees is not an ideal situation.  We decided to go down and say hi to all our friends that were racing before the 50K started.  Then we were able to get showers down at the conference center where there was hot water.  After that we went down to our aid station at the start finish area and helped Cheryl and Amy set up although they almost had it all done by the time we got there!  It was non stop action as Luc and I were refilling everyone's water bottles and I think we became camelbak experts.  It is not easy filling the water bladders and they come in all shapes and sizes.  Cheryl and Amy along with a few others were making sure the runners were getting enough food.  Along with being a great aid station captain Cheryl is a PB & J making machine!

We had a good time volunteering and were exhausted from getting up so early.  We left the race as people were finishing and went to Trails End Pizza for some food.  After eating we just went back to the camp site and sat by the fire talking for awhile.  I think we both went to our tents around 8:30 to go to sleep.  We got up the next day and packed all our stuff up so we could both take off after the half marathon.  Luc and I ran with Amy during the half marathon and she had already done 5 miles or so before it started because she needed extra miles for her training run.  It was nice to catch up with her and hear about her training for the Mohican 100 miler in June.  Lucas did well in the half marathon and did not have any stomach issues when using Tailwind Nutrition that I turned him on to.  I have been using Tailwind nutrition for running and it literally is everything you need to keep fueled during a run.  After the half marathon we hung out and talked for a little bit and then started the long drive home.  I left with a big smile on my face as I always do after the Forget the PR weekend.  It was great to see all of my Ohio ultra friends and hang out with my bro Lucas. 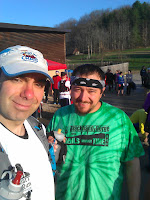 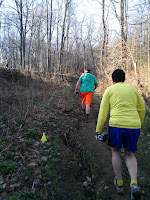 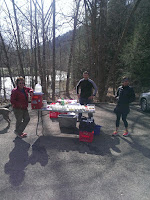 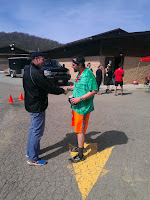 Posted by Jamie Farley at 4:04 PM No comments: