This race takes us to Fremont, Ohio. This was an all around great weekend. We arrived at East Harbor State Park Friday night, which is where we were camping for the weekend with Jessica's family. We got our tent set up and just relaxed since we knew we were getting up early the next day to drive to the race. So we got up the next day and learned that our sister-in-law Sarah was going to run the race with us, which was cool because...the more the merrier! So we got to the race, got our registration packets, and we had plenty of time to get warmed up. I was originally going to take it easy in this race since last Monday I stepped on a huge rock and my forefoot was in some pain last week. When the race started I felt no pain and my competitive instincts took over. So off I went in my trusty Vibrams Five Fingers KSOs! Here is a picture of us before the race: 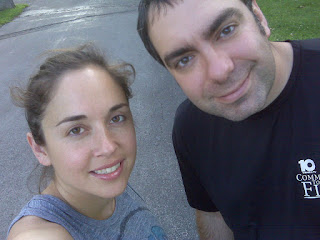 This race was a 2 miles out and 2 miles back course which took us through a residential neighborhood and then out to a country road. There were about 250 runners, so another small race but we had a great time. The residents along the race coure were all out by the street cheering us on, handing us water and best of all...spraying us down with hoses...it was extremely hot and humid out so it felt great to cool down. Jess swears that if it was not for the people spraying us with hoses then she could not have finished the race. There was also some very good runners in the field. I was still on my first 2 miles out and the leader flew by me on his way back and he was really moving! I later found out that he finished the 4 miles in under 20 minutes, which is an unbelievable time. Another cool thing about this race is they had pacer runners holding signs. As long as you finished ahead of the pacer then you would have that time or better (in theory). Jess's goal was to finish ahead of 40 minutes and my goal was to finish ahead of 35 minutes. Here is an overhead view of the course, click on it to see the blown up version: 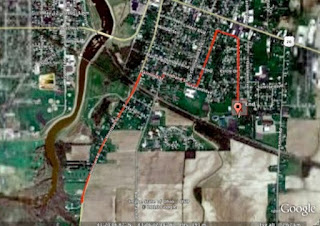 So I felt pretty good the first mile and was surprised that I was keeping about a 9 minute mile pace because it did not seem like I was going that fast. The second mile I even felt better and picked up the pace. I was worried that I would run out of gas if I kept going hard in the first half of the race, but I never burned out. The 35 minute pacer was ahead of me for most of the race. I knew I needed to catch him in order to achieve my goal of 35 minutes or better. About 3 miles in I seen the pacer up ahead. So I sped up and caught him around the 3.25 mile mark. I told him "your the guy I have been looking for!" and he just told me to finish in front of him and I would be O.K. I was happy to be at that point so I sped up and left the group that was hanging with the 35 minute pacer. I think I heard someone mumble that I had an unfair advantage because I was wearing my Vibrams Five Fingers and they are really light. Whatever it was I did not care. I was well on my way to beating my goal and there were no aches or pains holding me back this time. In fact, it felt good to be the one passing people up at the end rather then getting passed. So, as I near the end of the race I run underneath the big archway and I am getting my picture taken and I thought that was the finish line, but it was not, I still had about 10 yards to get to the finish shoot. I forgot to stop my watch right away so I think my time was 34:30!

I stood at the finish line and was excited to see Jess finish just in front of the 40 minute pacer! The only problem is that the pacer was off by about 45 seconds so Jess was just over the 40 minute goal. That is still a great time and I am very proud of her. Then Sarah came in after Jess and she did great considering it has been awhile since her last race. There was a steak dinner afterwards provided by Applebees, but we elected to bypass the steak dinner since it was morning and we had a fun day of boating ahead of us. Jessica's brother John and his wife Sara took all of us out on their boat. We anchored off the shore of kellys island and went swimming. We got to see both of our fathers over the weekend, which was cool since it was father's day.

Then Monday we went to see Caballo Blanco speak in Maumee, OH. It was really cool to hear him tell his life story. He is a very interesting guy and he has started one of the greatest ultra races of all time. It is held each year in the Copper Canyons of Mexico with the Rarámuri tribes (the running people). The winners of this race receive corn and money prizes. It has been going on for 8 or 9 years now. Caballo and the Rarámuri are featured in Christopher McDougall's book called Born to Run, which is a great book and I highly recommend it. Here is a picture of us with Caballo: 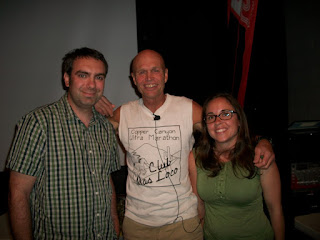