This race takes me back to Woodstock for the third year in a row.  I was pretty excited about this for a few reasons.  First of all, some of my friends that came from Iowa and Minnesota last year were talking about coming again this year.  Secondly, Jessica showed great interest in doing the trail half marathon and I was happy about that (a win in my secret quest to prove to her that trail running is really fun!).  Last but certainly not least, my good friend Nick was doing the 100K and it was his comeback ultra after shattering his foot / leg only a year ago after falling off a waterfall while trail running in Mohican.   One regret I have from this event is that I did not really get any pictures.  So this blog will be mostly reading without any visual effects except for a picture of the landshark!  You are probably asking what the landshark is, so keep reading and you will find out.

Nick had talked about upgrading to the 100 miler and I told him I was going to pace him on the last lap which would of been about 12 miles.  When he told me he was going to stick to his original plan of doing the 100K I decided that I would just run the half marathon with Jess and kind of take it easy since it was the weekend before my 50 miler in Colorado.  I also learned that 10 time Mohican 100 mile finisher Mark Carroll was coming to Woodstock to pace Nick in the 100K so that made me glad that someone would be with him.  So, plans kind of changed a few weeks before the event.  I learned that my friends from out of town could not make it and when signing up for the half marathon I discovered that the camping at Hell Creek Ranch (where all races start and end, also, all activities take place here) was SOLD OUT!!  Woodstock was pretty low key two years ago when I did my first half marathon.  Then last year the popularity had really grown.  Now it is a full fledged rocking race weekend.  They are fully organized and I am just amazed at how many people are now involved with the event.

So Jess and I got a camp site at Bruin Lake which was a fifteen minute drive from Woodstock.  Earlier on Friday (the day the 100K and 100 mile races started) Nick texted me and said he had forgotten one of his water bottles.  He asked if I could bring one that he had loaned me earlier in the year when I paced Lucas in the Mohican 100.  Luckily I already planned on returning it to him and had it packed in my bag.  I told him I would drop it off at the aid station which was being run by one of my new trail running friends..T-P (T-P works at the corporate office of the company I work for and we met out on the trails one day).  Jess and I checked in at the campground and the headed over to T-P's aid station.  I said hello and was hanging out for a minute when all of a sudden Nick showed up!  He was on his second loop of the ultra course and it was great timing as I filled the water bottle I had brought to return to him and he said a quick hello / thanks and took off.  We then learned that Nick and some other runners had been stung by a group of ground hornets,  Nick had a bump on his head that got huge but it went down throughout the run,  Jess and I talked to T-P for a minute longer but didn't stay to long since he was extremely busy running his aid station.

As we were getting ready to leave there was a runner who came into the aid station wearing a shark costume.  Turns out he was running the 100 miler in that thing!!  Nick later told me that during the night portion of the run the landshark came up behind him and said he needed to follow because he lost his head lamp but then took off without one in the dark.  Nick said it was freaky when the eyes of the shark costume were staring at him (since they were in the back of the costume) as he ran by.  We also laughed at how heavy that costume must of gotten in the rain when it got soaked.  Turns out the landshark has been running in that costume for 10 years.    He did finish the 100 and here is a picture of him after his finish: 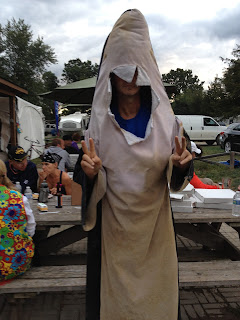 Jess and I went back to our campsite and as soon as we got settled in our tent to go to bed it started raining.  If you read my blog from last year you know the night before the race it poured all night and turned the course into a mud fest.  Whoever said history repeats itself is certainly correct because it poured down rain all night again this year.  As we woke up early the next morning I had some concerns..was doing a half marathon the week before my 50 miler to much?  Was I risking injury by going out on a slippery muddy trail?  If I got injured I would be devistated since I put in so much training for the biggest running event of my life which was only a week away in Colorado.  Then I decided that I love trail running and that I was going to strap on my VFF Trek Sports and go out there with Jess and have a great time on the trails.  That is exactly what happened.  We just enjoyed the entire course and we ran the whole thing with big smiles on our faces..at least I think Jess was smiling!  The course was not as muddy as the previous year since it did not rain all week, only the night before.  Nothing to interesting happened during our 13 miles on the bridal trails of the Pinckney Rec Area.

When we crossed the finish line we grabbed a few snacks and then decided to try and find out where Nick was camping.  I thought he might be finished but was unsure.  After walking around the campground we finally found his camp spot and I seen his running vest and water bottles.  At this point I knew he was finished but still curious as to how he did.  Then I seen the First in age group trophy (toy VW van) sitting in the dash of his car.  We walked up to the main area and he was up there drinking some of his delicious home made brew that he put together specially for Woodstock.  When we finally said our hello's I could tell he was really pumped up and he did confirm that he got first in his age group for the 100K!! Congrats to Nick!!  What an amazing accomplishment.  I came back later in the evening and hung out with him for a few hours at the campground.  I am really impressed by what he has accomplished and it gave me some good motivation for what laid ahead for me in one week.

It was another exciting year at Woodstock and looking forward to many more.  Stay tuned for my next blog which will be coming right up....see if I am able to survive 50 miles in the mountains at Run Rabbit Run 50 miler!!
Posted by Jamie Farley at 7:12 PM